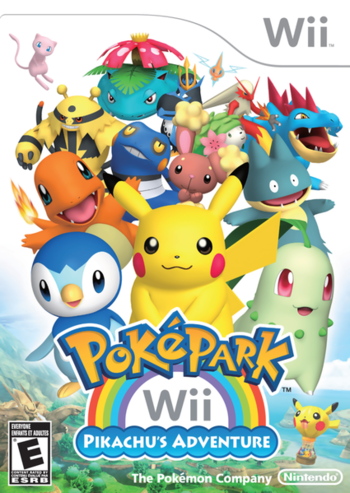 The "cute Pikachu" Pokémon spinoff series for the Wii, and perhaps the one with the highest production values: instead of being a virtual pet, it's more of an action/adventure game.
Advertisement:

PokéPark Wii: Pikachu's Adventure stars our favorite Pokémon, Pikachu, as the main character. Mew has asked him and his friends to help repair the Sky Prism that powers Mew's home, the Sky Pavilion. The Pavilion floats high above the PokéPark, where many Pokémon live and come to play: the friendship and love among the Pokémon of the park sustains the Prism, and without it, the Pavilion will fall and crush the PokéPark below. Pikachu can befriend other Pokémon, thus helping to restore the Prism, by doing favors for them, or proving himself in Skill Games with them.

The game has a sequel, PokéPark 2: Wonders Beyond, which got released on the Wii (in Japan, it's titled Beyond the World) and featuring Pokémon from Black and White and multiplayer. This game has a much deeper story involving the possible destruction of the Pokémon World and the Wish Park.