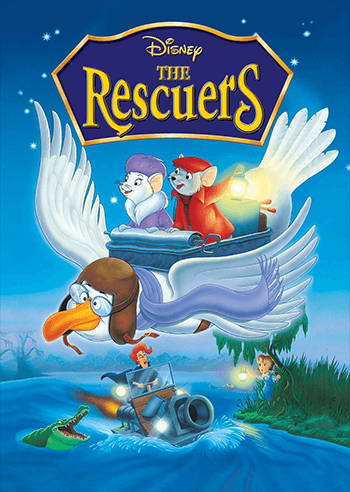 ♪ "Who will rescue me...?"♪
Advertisement:

The Rescuers is the 23rd entry in the Disney Animated Canon. Two mice, Miss Bianca (Eva Gabor) and Bernard (Bob Newhart), travel around the world to "R - E - S - C - U - E" cute human children while dealing with their own Unresolved Sexual Tension. The film was based on a series of children's books by Margery Sharp. The main similarities are with the first two books, where an orphan girl called Patience is kidnapped and held as a cleaning slave by a cruel diamond-obsessed Duchess.

The Rescuers was released in 1977. The flamboyantly evil Madame Medusa (Geraldine Page

) is trying to get her hands on the world's largest diamond hidden in a gloomy swamp. Needing someone who will fit in a tiny grotto, she kidnaps a disconsolate orphan girl named Penny (Michelle Stacy). Penny sends out a Message in a Bottle asking for help, which is intercepted by the all-mouse Rescue Aid Society, who for some reason, do not put it somewhere the police might find it while they send out their own agents. Bianca (Eva Gabor

) and Bernard (Bob Newhart) are then sent out to save her, with help from an albatross named Orville (Jim Jordan

What makes the movie interesting in a Real Life sense is how it came during a time when Disney was facing changing fortunes. The film was almost a reflection of how the Disney company was facing up to the death of its founder — the late '70s Disney movies tended to be considerably darker than their forebears, reaching a nadir with the next movie, The Fox and the Hound. These movies both contained utterly gut-wrenching examples of Parental Abandonment. And Madame Medusa's casual nastiness towards Penny in the first movie ("What makes you think anyone would want a homely little girl like you?") comes up against the more outlandish behavior of any Disney villain in history simply because as a verbal shiv, to a freaking child, it has no equal. On the technical side, this film was the first Disney animated film to move away from the hard scratchy outline look that was the norm for Disney animation since 101 Dalmatians thanks to improvements of xerography processing technology to allow a softer look. It was also one of the few box office successes for Disney in the post-Walt/pre-Renaissance era, being the highest grossing animated film of all time until one of its directors, Don Bluth, challenged Disney with An American Tail nearly a decade later. In addition, this helped give rise to Chip 'n Dale: Rescue Rangers due to originally being a series based off the movie until Down Under was greenlit, at which point Tad Stones helped mold the series into what it was. Most importantly, it was the last film Walt Disney himself had even the smallest bit of involvement in whatsoever, as the earliest plans for it began two years before his death.

It was followed up by a sequel in 1990. For tropes related to that film, please visit The Rescuers Down Under.

Not only does Madame Medusa have the same type of car as Cruella De Ville, but the same mad driving skills as well!

Not only does Madame Medusa have the same type of car as Cruella De Ville, but the same mad driving skills as well!