Theatre / The Rite of Spring 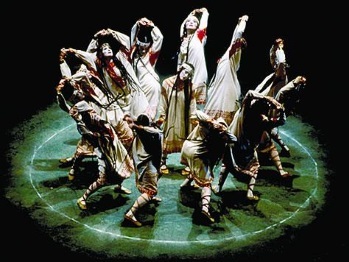 The pagan ritual, as recreated by The Joffrey Ballet.

Note the lack of dinosaurs.
I-Gor-Stra-Vin-Sky-Is-A-Son-Of-A-Bitch.
—Mnemonic used by orchestras to count the tympani hits at the end of "Mystic Circles."
Advertisement:

The Rite of Spring is a groundbreaking ballet with music by Igor Stravinsky and original choreography by Vaslav Nijinsky. The story is simple enough: A young girl dances herself to death in order to provide a sacrifice for a pagan ritual. However, the work is famous for its sexual content, primitivism, radically anti-ballet dance style, and extremely innovative and dissonant musical score, all of which caused a huge uproar when it premiered in Paris in 1913. In the end, Rite of Spring had a huge influence on the fields of both music and dance, and it is still very highly regarded today.

The work was famously used in Fantasia, which unfortunately has also led many people to incorrectly associate the ballet with dinosaurs. The final movement, "Sacrificial Dance," was one of 27 songs selected for inclusion on the Voyager Golden Record in 1977.

Sections of the performance:

Part I — Adoration of the Earth