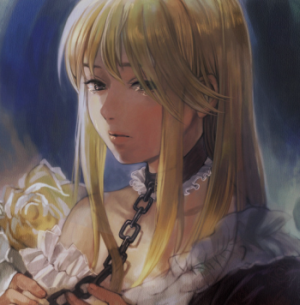 Don't be fooled by the ruffles and roses.
"I train my men to make sure the slaves' flesh bulges a bit around the top and bottom. [...] If you fit it just right, their body never gets used to the feeling of wearing it. It cuts in just enough when they swallow or turn their head to remind them who they belong to. And it's that constant reminder that keeps them docile."
— Silus, Fallout: New Vegas
Advertisement:

When you see someone wearing a collar (particularly the ones made of leather — and we're not talking about the collar of a shirt), you can assume that they're under the control of someone else. It's also a popular device to use when brainwashing someone, and it may also be a part of a Go-Go Enslavement routine. If it's part of a person's normal costume, it's usually intended to suggest that they're sexually adventurous, and often to suggest submission (though dominant types frequently wear them too). It's especially popular with characters on various levels of the Sliding Scale of Anthropomorphism who can justify it as basically the only article of "clothing" associated with animals. This is generally intended as fetish appeal (and even if it wasn't intended as such, will become fetish appeal anyway) because of the connotations of bondage and slavery.

Can sometimes take the form of necklaces, chokers, and cameos. May have some overlap with Shock Collar, Explosive Leash, and Restraining Bolt.

Because slave collars are a pretty obvious sign that someone is brainwashed, under Mind Control, or, y'know, enslaved, it will often be offensive to The Hero. If the hero has to fight someone wearing a collar, he may target it in the hopes that his opponent is an unwilling thrall of the Big Bad and destroying the collar will free them.

Spiked collars generally don't fall under this trope. The Chains of Commanding is completely unrelated.

Providence develops collars that painfully force EVOs into submission, and use them to gain the favor of the masses.

Providence develops collars that painfully force EVOs into submission, and use them to gain the favor of the masses.