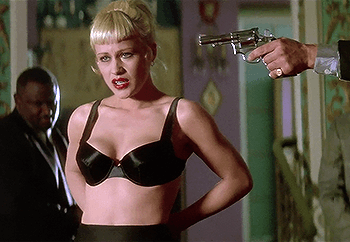 "You have seen, gentlemen, how a woman must be made to remove her own clothing, depriving her of her dignity. With a man, it is the opposite. Strip him!"
— Dr. Molloch, The Evil That Men Do
Advertisement:

A captured or otherwise helpless victim (we'll call her Alice) is stripped of her clothing as a form of torture or humiliation.

This can be the prelude to serious sexual assault, but the point of the exercise is to torment Alice by leaving her bare and exposed to the eyes of her captors — frequently Come to Gawk is involved. It's especially cruel if Alice is forced to self-strip, symbolizing the complete loss of her freedom (though being stripped by the antagonist is still pretty cruel). The temperature will often be quite cold as well, causing Alice to shiver.

A strip search by the police or other security forces may fall under this trope, particularly if we are dealing with Corrupt Cops or we already know Alice is innocent.

The captive's reaction depends to some extent upon whether it's Alice or Bob being stripped. Alice may blush and cringe, and the I Have You Now, My Pretty subtext will be quite evident. Bob is more likely to cover his humiliation under a mask of defiance, while the sight of his naked body (whether from Heroic Build or... other endowments) may cause his male guards to feel ashamed and inadequate. When a male is Shamefully Stripped, this is often a sign that the villain is a sexually voracious woman. Alternatively, the villain may be a Depraved Bisexual, Depraved Homosexual, or Psycho Lesbian victimizing a same-sex captive.

Related to Defeat by Modesty (a character is unable to fight due to his modesty being compromised) and Undressing the Unconscious (a character has their clothes removed while they were in an unconscious state). Fanservice for some people, and sometimes specifically meant to be this by the creator — although some instances of this are so cruel that even the easily titillated are likely to be turned off.

Contrast Go-Go Enslavement, in which the torture is that Alice loses the right to choose her own clothing and must wear the outfit her captors provide — clothes which are scandalously revealing or utterly humiliating in some other way. Occasionally a prelude to Bathe Her and Bring Her to Me. Accidental happenstances go into Wardrobe Malfunction or Stripping Snag. If Alice loses her hair instead of her clothes, it's Traumatic Haircut. See also Pervy Patdown for cases where a strip search is performed (or just invoked as an excuse). The opposite is Defiant Strip.