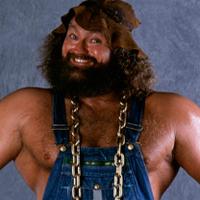 James Morris (born July 5, 1952) is a retired American Professional Wrestler and manager originally from Bowling Green, KYnote But billed as being from the unincorporated community of Mud Lick. best known for his work for WWE in the 1980s as Hillbilly Jim. He started his career in Memphis as Harley Davidson, a biker gimmick. He was introduced to WWE in late-1984 as a "fan" in the crowd, leading to vignettes of him on the farm and being "trained" by Hulk Hogan. This led to the introductions of his "family," starting with Uncle Elmer (Memphis veteran Stan Frazier) and Cousin Junior (Lanny Kean, who later went back to Memphis to become, among other names, Moondog Cujo), who was replaced by Cousin Luke (Gene Petit). He made his PPV debut in the battle royal that was part of the Chicago stage of WrestleMania II. After his "relatives" left WWE, Jim's push was reduced and he eventually was taken off of TV to become an ambassador for the company. He was brought back in 1996 as the manager for the hillbilly Tag Team the Godwinns until they turned heel. He has made a few appearances since then, most notably in the Gimmick Battle Royal at WrestleMania X-7, which The Iron Sheik won by eliminating Jim. He currently has his own radio show, Hillbilly Jim's Moonshine Matinee, on Sirius Satellite Radio

During the height of his 1980s fame, Hillbilly Jim made multiple mainstream appearances, including Hee Haw and Live With Regis and Kathy Lee, as well as many telethons and charity events.

He was inducted into the WWE Hall of Fame in 2018.