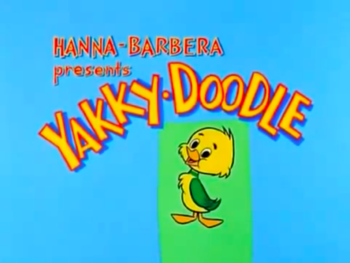 Yakky Doodle, like many of his fellow Hanna-Barbera characters, started out as a supporting character that got their own line of shorts. Yakky's cartoons specifically were a supporting slot to Yogi Bear.

Yakky (voiced by Jimmy Weldon in a manner suggesting Donald Duck), is a small duck who doesn't have a Momma and often gets himself into adventures — a lot of which involve someone trying to eat him, usually Fibber Fox or Alfy Gator (both voiced by Daws Butler). His best friend is a dog named Chopper (voiced by Vance Colvig).