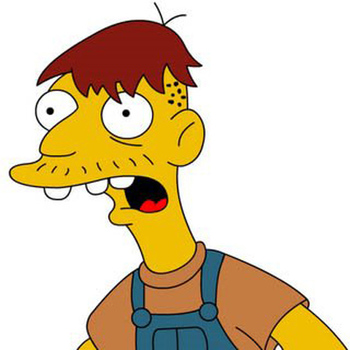 The Inbred Ignoramus, Exhibit A: Cletus the Slack-Jawed Yokel.
Advertisement:

One of the more common stock characters, the Half-Witted Hillbilly is the unrefined, uneducated, backwards yokel found in fiction. While they technically can come from any predominantly rural region, in American pop culture they're most commonly portrayed as hailing from the Deep South, Appalachia, or the more sparsely populated areas of Texas and the Southwest.

The Half-Witted Hillbilly can come in many different forms, but most of them fall into five broad categories, all typically sporting a Hayseed Name:

The Genuinely Disabled: Rural characters who actually suffer from a true mental illness or disability tend to be edge cases at best. They tend to have more nuanced, fleshed-out, sympathetic portrayals than most instances of this trope, possibly to avoid the risk of attracting "Dude, Not Funny!" reactions. While characters like Forrest Gump or Karl Childers from Sling Blade may technically fit most or all of the description on paper, they fill different roles in the story.

The Country Bumpkin: This is perhaps the broadest category of Half-Witted Hillbilly. They may be portrayed as a bit backwards, Book Dumb, or remarkably gullible/naive, but generally not incredibly stupid. May or may not be a fount of homespun wisdom and/or esoteric knowledge about obscure subjects. May be extremely capable in the right environment or situation, or even a Genius Ditz who can whip up Impossibly Delicious Food with only a possum and some veggies. Very commonly overlaps with the Kindhearted Simpleton as many Country Bumpkins are generous and hospitable, whether due to social mores, religious convictions, or innate goodness. While their foibles are generally Played for Laughs, most Country Bumpkins tend to receive positive-to-neutral portrayals.

The Backwoods Bigot: This variation of the trope is portrayed as "stupid" not because of mental acuity (or lack thereof), but specifically due to their social or political prejudices. Much more common in Political Cartoons than elsewhere, but do appear in other mediums on occasion. Tends to cross over with Insufferable Imbecile.

The Inbred Ignoramus: The Inbred Ignoramus tends to encompass all the worst stereotypes of rural America: perpetually drunk or on drugs, misanthropic, Too Dumb to Live, unemployed and/or criminal, etc. May have some redeeming characteristics, but generally not. If the character is not canonically inbred, you can bet that the joke will be made at some point. These characters tend to be proof that rural people are still on many people's list of Acceptable Targets.

It's worth noting that the Half-Witted Hillbilly is by no means a universally loved trope, though it has quite a way to go before reaching Discredited Trope status. Most of the Half-Witted Hillbilly's stereotypical characteristics stem from the fact that rural areas — particularly the more isolated ones — tend to struggle with poverty and a lack of educational resources, so the basic premise of this trope often comes down to "poor people are stupid." To further rub salt in the wound, the old chestnut about rural communities being inbred is largely based on assumptions and exaggerations reported by late-19th century journalists and missionaries, rather than actual reality. It's not hard to see why this trope may be considerably less funny to some people than others.

Compare The Idiot from Osaka, which is a similar concept in Japanese media. Contrast Southern-Fried Genius. May overlap with the Country Cousin, Farm Boy, Farmer's Daughter, Good Ol' Boy, or Southern-Fried Private.

No Real Life Examples, Please! This is a play on a potentially hurtful stereotype, after all.

Much later in the conversation, after some attempt to get Carter to understand a Double Entendre, Baker comments "Them playwriters down in Ankh, boy, they certainly know about us."