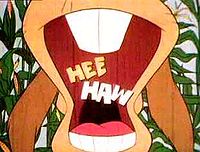 Hee Haw was an American television variety show featuring country music and humor with fictional rural Kornfield Kounty as a backdrop. It aired on CBS from 1969 to 1971 before a 20-year run in local syndication. The show was inspired by Rowan and Martin's Laugh-In, the major difference being that Hee Haw was far less topical, and was centered on rural culture and Country Music. Initially co-hosted by musicians Buck Owens and Roy Clark, the show was well known for its voluptuous, scantily clad women in stereotypical farmer's daughter outfits, its male stars Jim and Jon Hager, and the cornpone humor of its comedy sketches.

The appeal of Hee Haw was not limited to a rural audience. It was successful in all of the major markets, including New York City, Los Angeles and Chicago.