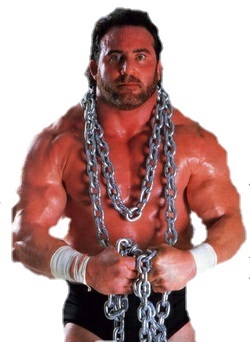 Raymond "Ray" Fernandez (May 7, 1956 – March 6, 2004) was an American Bodybuilder and Professional Wrestler from Tampa, Florida best known for his work in the 1980s as Hercules Hernandez, or simply Hercules. He debuted in 1979 and wrestled for various National Wrestling Alliance territories. He arrived in WWE in 1985 as a Heel managed by "Classy" Freddie Blassie. As part of Blassie's retirement in 1986, he sold Hercules' contract to the debuting Slick, though Slick sold it to Bobby Heenan. He turned Face in 1988 and stayed that way until he went Heel again and teamed up with Paul Roma as Power and Glory, with Slick as their manager. That ended when Roma left in 1991. Hercules left for WCW in 1992 and had a small run as the masked Super Invader. He dropped the mask and jumped to New Japan Pro-Wrestling and formed The Jurassic Powers with Scott Norton in 1993. He left in 1994 and finished his career in the independents, retiring in 1999. He passed away from heart disease on March 6, 2004.

Among his in-ring achievements, he was a 2x NWA Central States Tag Team Champion

with Scott Norton as The Jurassic Powers.