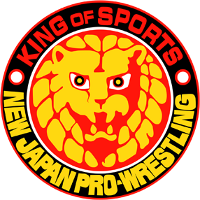 "Baba-san's is a showman style. Mine is a strong style."
—Antonio Inoki, distinguishing the style of his company to Giant Baba's All Japan Pro Wrestling
Advertisement:

New Japan Pro-Wrestling (NJPW) was one of two wrestling promotions (the other being All Japan Pro Wrestling) to split off from the Japan Pro Wrestling Alliance (JWA) in the 1970s. Founded by Antonio Inoki in 1972, it competed with AJPW for supremacy in the wrestling field. Despite floundering during the 1990s due to AJPW's dominance, NJPW is currently the largest wrestling promotion in Japan and one of the largest in the world.

From its creation in 1972 until 1986, NJPW was a member of the National Wrestling Alliance, although All Japan was able to block most Western talent from working in New Japan; the main holdouts were André the Giant, Hulk Hogan, and Stan Hansen (who eventually jumped to AJPW, becoming the highest paid wrestler in Japan in the process). Traditionally, New Japan was the least "Westernized" of the two major league promotions, working a more realistic, submission and kick-based style based on Eastern martial arts. While more of a "sports entertainment" presentation used by NJPW compared to its AJPW counterpart somewhat offsets this (although this situation got reversed when AJPW entered the "Puroresu Love" era), the company is also known for openly engaging in working agreements with various MMA and pro wrestling promotions around the world, including: Consejo Mundial Lucha Libre, World Wrestling Entertainment, World Championship Wrestling, TNA, Ring of Honor, PRIDE Fighting Championships, Pro Wrestling NOAH, All Elite Wrestling and various other MMA and pro wrestling promotions. Their biggest yearly event is the show at the Tokyo Dome on January 4 and 5, Japan's equivalent to WrestleMania, which has been known since 2007 as Wrestle Kingdom. (In 2022, WK added a third night on January 8 in Yokohama.)