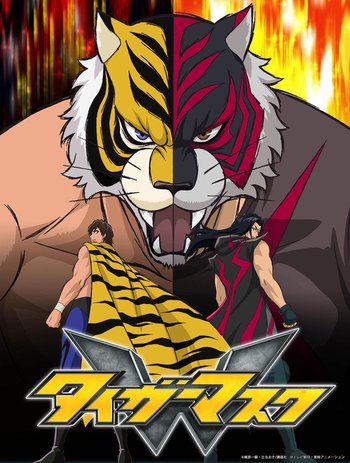 Who is the ultimate tiger? Me, or you?
Advertisement:

Two young pro wrestlers, Naoto Azuma and Takuma Fujii, were trainees at a small pro wrestling organization called Zipang, lead by Daisuke Fujii, Takuma's father. Its big break came when the group got a deal for a tournament with the American branch of the GWM - Global Wrestling Monopoly, a major force in the world of pro wrestling. But their dreams and hopes soon turned into nightmares, as the GWM's wrestlers weren't there just to win - they were there to crush them into oblivion. Nowhere was that more apparent than during the final match, where Daisuke got beaten to the point of being crippled by Yellow Devil - GWM's Pacific Champion. With Zipang getting dissolved after the match, all Naoto and Takuma were left with was the desire for revenge!

After the devastating match, Naoto was approached by Kentaro Takaoka, who asked him if he truly wants to become strong enough to defeat the Yellow Devil. He told him about the Tiger's Den - the secret organization behind the GWM. Their modus operandi is to put young people through a Training from Hell to become powerful wrestlers that go on to dominate the wrestling rings all around the planet... on the condition that they give half of their earnings back to the organization. It once controlled the pro wrestling industry from the shadows, until Naoto Date, one of their strongest wrestlers, betrayed them in order to provide for poor children. In retaliation, the Tiger's Den sent hitmen after him, in and outside of the ring. Date took a new masked identity and, through countless battles, was able to bring the organization down! But thought destroyed, the Tiger's Den has returned. In order to stop them, Takaoka makes Naoto an offer - he will put him through training that puts the Den's regimen to shame. Once he completes it, he will gain not only the strength to oppose the Tiger's Den, but will also inherit the spirit of Naoto Date - the will of Tiger Mask!

But what Naoto doesn't know is what path his best friend Takuma took. He was approached by Mister X, one of the higher ups of the Tiger's Den, and the man responsible for his father condition, the Yellow Devil! They make him an offer to join the Tiger's Den, and Takuma agrees. But he doesn't plan to play along with the group's power plays. He aims to not only bring down Yellow Devil, but to also destroy the Tiger's Den from within! After successfully passing their training, he is given a new wrestling identity - Tiger the Dark.

Two young men, both went through hell in order to become tigers. But whose fangs and claws are the strongest? The tiger's roar fills the ring once again!

Tiger Mask W is a wrestling Anime series and a sequel to the original Tiger Mask from the 70's. It's produced by Toei Animation. It premiered October 1st, during the Fall 2016 Anime season. It is availablenote Only in the U.S.A, Canada, South Africa, Australia, New Zealand, Central and South America including the Caribbean. for streaming on Crunchyroll here

This show provides the examples of: