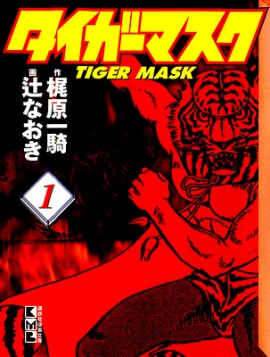 Tiger Mask is a Japanese manga series written by Ikki Kajiwara and illustrated by Naoki Tsuji. It was later adapted into an anime series by Toei Animation.

In the manga and anime, Tiger Mask was a feared heel wrestler in America who was extremely vicious in the ring. After returning to Japan, Tiger Mask joined the Japanese League headed by Giant Baba and Antonio Inoki (also Real Life wrestlers) who were then on the verge of kicking him out for his use of villainous techniques. Tiger Mask (whose real name was Naoto Date) was raised in an orphanage, and later joined Tiger's Cave (a criminal cartel whose main activity was to train young people to become Heel wrestlers) to become "Strong as a Tiger".

To save the orphanage where he was born and raised, he decided to go against the main rule of Tiger's Cave (all wrestlers must give 50% of their income to the organisation) and as such he was marked a "traitor" and other wrestlers from the Cave tried to kill him in the ring (while hired assassins tried to do the same outside of the ring).

When an orphan living in the same orphanage as Naoto started to take his heel persona as a life model, Tiger Mask decided to fight honestly in the ring, starting a series of confrontations that eventually brought him up against the Big Bad, the master of Tiger's Cave.

Most people outside Japan, though, only know Tiger Mask as a real professional wrestler from a fad in The '80s. While it only began as a homage and promotion to the fictional character, it grew into a popularity of its own, especially in the West, due to the memorable Dynamite Kid fights. Since then five wrestlers have adopted Tiger's identity: Satoru Sayama, Mitsuharu Misawa, Koji Kanemoto, Yoshihiro Yamazaki and Ikuhisa Minowa, in that order. (Before them, there was also Samson Kutsuwada in Korea, but that didn't spawn a continuous legacy.)