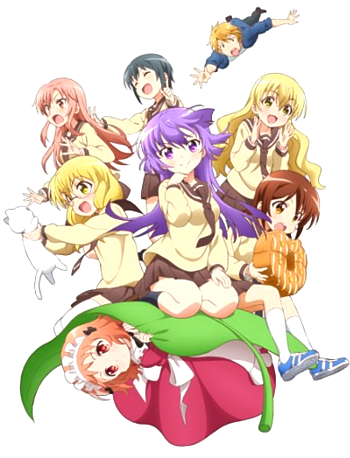 Three Leaves, Three Colors, otherwise translated as Three-Person Trefoil or Sansya San'you (三者三葉), is a comedy manga written and drawn by Cherry Arai (who would later go on to do Engaged to the Unidentified). It was serialized first in Manga Time Kirara in 2003, before it eventually moved to submagazine Kirara Carat in 2007 and ended in 2019 with a total of 14 volumes. An anime adaptation by Dogakobo premiered during the Spring 2016 Anime season. The anime has been licensed by Funimation including with a Broadcast Dub.

Futaba Odagiri is the new transfer student with a super energetic personality, Teru Hayama is the class president with a surprisingly mean personality contrary to her innocent looks, and Youko Nishikawa is from a formerly rich but now extremely poor family, who still holds on to her princess attitude. These three unlikely students with clashing personalities become good friends and survive the day to day life of teenage life.