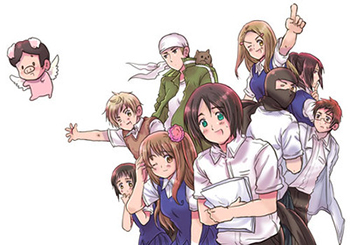 That Flying Pig over there is the Broadcasting Club's teacher advisor. He likes Butts.
Where do we even begin?
Advertisement:

Noto Kanazawa, prodigy broadcaster, is starting high school at Kitakou High. He wants to join the Broadcasting Club that did so well at the regional competition eight years ago. When he gets there, though, he finds a ninja commiting suicide.

The infamous club is sadly no more. The ninja, Suzuka Akafuku, was the only remaining member, and nobody could understand him because of the mask covering his face. So, Noto and the Ninja revive the club with the permission of Miyako, the Student Council President. They gain more members, the stoic Hatoba Isahaya, the Sentai loving country girl Rinko Tsugaru, the Keet Otaku Hinaji Kasukabe, and then they make a movie.