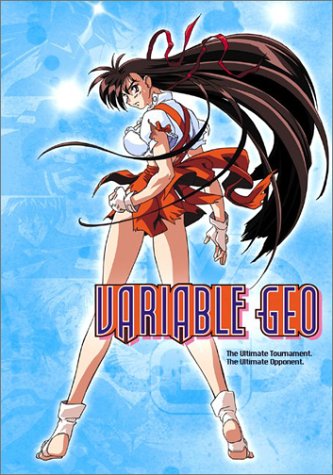 Goddesses, descend on the field of battle!
Advertisement:

The story of the OVA centres around "Variable Geo" or "V.G.", a global mixed martial arts tournament specifically for combat waitresses. They compete in hopes of winning the ultimate prize: 10 million yen and a piece of prime real estate anywhere they choose. Their sponsornote the diner, or restaurant that employs them gets a year's worth of free advertising. But V.G. is strictly an All or Nothing affair, meaning, the losers go home empty-handed and publicly humiliated, because they have to strip for the crowd. At a certain level of competition, they also have to... put on a show.

But the potential for public humiliation soon becomes the least of their concerns, as the unsuspecting vixens eventually learn that the competition is a front for something far more sinister. A nefarious plot that involves kidnappings, unsanctioned matches, and inhumane experiments unfolds behind the scenes of the tournament proceedings, and the ones behind it all are the very people sponsoring it: The Jyahana Group.

One of the tournament's competitors, Yuka Takeuichi, falls into the plot when her best friend and old sparring partner, Satomi Yajima, goes missing. Yuka fights against—and alongside—several other tournament competitors as they search for the truth behind V.G. At the same time, Reimi Jyahana becomes aware that her company is involved in the nasty goings-on behind V.G., which prompts her to investigate the matter personally. How do these pieces fit together, and what is The Jyahana Group's purpose?