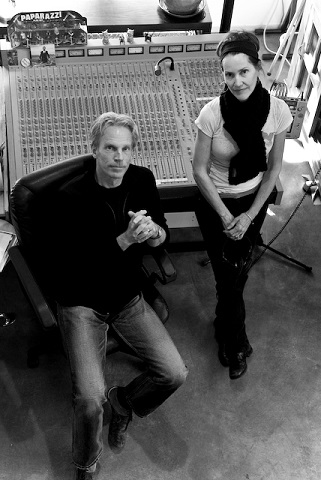 Waiting for a star to fall, and carry your heart into my arms, that's where you belong, in my arms baby, yeah...
Advertisement:

Shannon Rubicam (born October 11, 1951) and George Merrill (born January 10, 1956) found most of their success behind the scenes as songwriters. After a relatively inauspicious debut album, Rubicam and Merrill received their first big break when a song they wrote for Janet Jackson found its way to some obscure cousin of then-famous Dionne Warwick. "How Will I Know" exploded to the top of the charts, and a star was born. Fittingly, a sighting of a shooting star at one of Houston's concerts sent Rubicam scrambling for her notebook, writing the lyrics to a song she intended to be Houston's next smash.

You may know this one.

In the meantime, the couple went through a yearlong separation while working on their followup album, Reel Life. Lyricist Rubicam turned loose many of their relationship issues as words in the many, many songs eventually culled down to the ten on the disc. Meanwhile, after Houston rejected "Waiting For A Star To Fall", studio heads, smelling a hit, passed it around to several artists including Belinda Carlisle before Boy Meets Girl finally took back their song and took it to the top of the charts, peaking at #5 stateside and the very top throughout Europe. It continuously resurfaces on eighties collections and briefly found its way back into the pop cultural spotlight via a 2006 "sample war" involving three competing songs.

Shannon and George patched up their relationship around the time of the release of Reel Life and married in the aftermath, semi-retiring as recording artists after the shelving of their 1990 followup album New Dream. In 2000, they began work on their self-released comeback effort, The Wonderground, but once again their personal issues found their way into their work as they worked their way to an amicable divorce. The Wonderground debuted to a warm reception as an Allmusic album pick, though a name change to Boy Meets Girl Music (apparently to avoid being buried by dating sites in search results) did the band no favors in the name recognition department.

Despite some recording, as of 2011 there are no plans for a new release.

Tropes associated with the duo