Manga / Those Who Hunt Elves 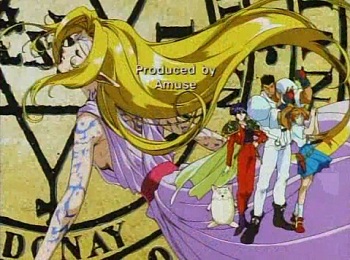 The three characters in question are Junpei (a thick-headed martial artist), Ritsuko (a tomboy and gun enthusiast) and Airi (an award-winning actress). They've been accidentally teleported from Japan to a High Fantasy parallel world, and when the spell to send them back home is interrupted, the magic goes berserk and manifests itself as five arcane sigils tattooed onto five elves across the land.

Of course, there is no way of knowing which elves have the sigils. So with no lack of misplaced determination and the help of an elven sorceress called Celcia (who is technically responsible for the mess in the first place), the trio vow to hunt down every female elf they can and strip them bare to inspect their bodies and retrieve all five fragments. Hilarity Ensues.

That's basically it. It's a comedy, and it also includes a tank animated by the ghost of a cat. There's not as much senseless Fanservice as the synopsis implies, as the story focuses more on Character Development, Rule of Funny and the sheer ridiculousness of their situation.

There is a Manga and Anime series. Even if it sounds familiar, it has nothing to do with He Who Fights Monsters.

and they're finally back home.