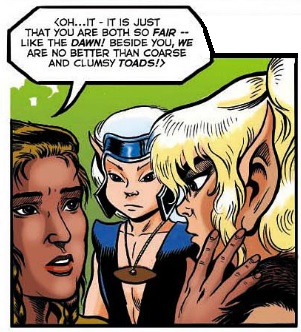 Soooo beautiful...
"I dared not call him handsome, for he had strange, exotic features, and the way they came together was so perfect it was painful. Though in all appearances a man, there was something terribly different about him. High cheeks bones in sharp relief, sensual lips, glowing white skin so smooth and even you couldn't see the pores, eyes ancient and wise, and yet a young body, lean and tall, great and terrible all at once..."
— Maddie describing an elf, Home with the Fairies, Chapter 6 "All Beholders Eye this Beauty"
Advertisement:

The Inhumanly Beautiful Race is a fictional non-human species that is always, nearly without fail, incredibly good looking. Not only are they good looking, but they tend to be described as better looking than the vast majority of humans could ever hope to be. When describing their beauty, authors tend to use terms like "inhuman", "otherworldly" and "ethereal". Depending on the author, such a species may inspire either simple chaste appreciation, or immediate and profound arousal. In extreme cases, their looks are so incredible as to act as almost a form of glamour, instantly become the center of attention (and desire) everywhere they go.

While this concept can be found in all forms of media, usually this works best in a non-visual medium. With a novel, the reader can imagine their own ideal of beauty. In a live-action work, it may become a case of a subjective judgement of Informed Attractiveness.

Elves and (humanoid) Angels almost invariably fall under this trope, and The Fair Folk are often included. Physical Gods can easily do so. In recent years, Vampires have also increasingly been portrayed as having inhuman hotness and allure, in contrast to older versions where they looked more like walking corpses. And it goes without saying for succubi. Not incubi, though, as they're usually depicted as a kind of rapist gargoyle-creature. Some interpretations of sirens go this route, although other interpretations make any perceived beauty only a result of Glamour or Mind Control and the Siren's true form ugly. If they have children with humans or some other "okay-looking" group, their children may benefit from Mixed Ancestry is Attractive.

Compare The Beautiful Elite, which is this in terms of a social class rather than a race, though not necessarily to the point of seeming inhuman. Also compare Sculpted Physique, which can sometimes overlap with this trope as characters with a sculpted physique are designed to be aesthetically pleasing yet visibly inhuman.

In order to make this not-subjective, examples should only be of cases where the race is described as being this In-Universe, either in the narration or by other characters.