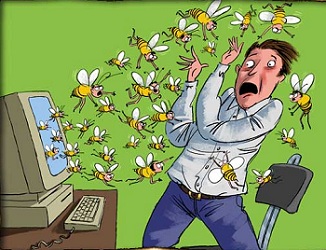 The internet responds to SOPA/PIPA/ACTA/TPPA.

Imagine this: You are the executive of a large corporation, and you have ordered the Chinese factory working for you to cut corners to decrease production costs on your latest product. You've left out a bit here and there (and a bit literally) on the end thingamabob.

Or maybe you are the host of a large MMORPG, and you have just released your latest update, which has patched a few fun, harmless bugs that some players will miss badly. Or maybe your latest expansion pack comes with intrusive DRM that rips the player's computer in two. Or maybe announce a new game only to reveal it was for the iPad or a smartphone? Either way, it doesn't matter — who will ever know? Consumers never tell each other things of this nature, right?

WRONG! If it gets on the Internet, double wrong. You've just awakened a sleeping giant and filled it with a terrible resolve.

This is the inversion of Viral Marketing. If someone, anyone, both knows of the offense you are committing and has internet access, they will spread it on the 'Net in any form possible, probably blown out of proportion. The Internet's anonymity allowing for poor taste, libel, and harassment, and its instantaneous communication allowing the hysteria to spread quickly, makes any situation a PR disaster waiting to happen, if not already happening. Before you know it, a stream of viral videos, parodies of your advertisements, and maybe photoshopped pictures of your spouse naked will be all over the Internet for the world to see, and if you're really unlucky or happened to piss off the wrong people, someone will DDoS you or break into a database to steal user information. All of this will emphasize the simple (to them) fact that you seriously screwed up. They will not cease and desist until the "problem" is fixed. In the worst case, they won't cease and desist then, either. (Ask Metallica.) Depending on the context, there can also be Motive Decay at play; when something blows up enough, the chance of it being derailed by psychopathic people who just want an excuse to make threats of violence or spew hateful vitriol increases. These people ruin it for everyone, as it's very easy to look at something that started as a totally legitimate grievance but turned into an Internet Jerk circus and dismiss it as the ramblings of stupid, ignorant boors looking for something to get angry over.

Now in this case, the target corporation has three options:

Compare Streisand Effect. Not to be confused with Internet Backdraft - that's the Internet ripping itself a new one.