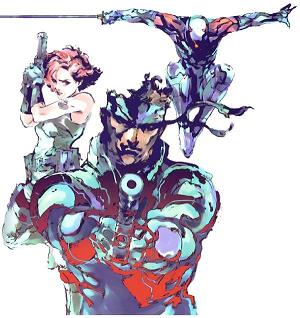 Tactical Espionage Action
Solid Snake: Anyone going with me?
Roy Campbell: As usual, this is a one-man infiltration mission.
Snake: Weapons and equipment OSP?
Campbell: Yes. This is a top-secret black op. Don't expect any official support.
Advertisement:

Metal Gear Solid is a stealth action game released by Konami for the PlayStation. It was one of the first 3D stealth games, having debuted at the 1996 Tokyo Game Show and E3 1997, before eventually releasing in 1998. With its cinematic style and fusion of gripping play mechanics with an equally gripping storyline, it shifted the acceptable degree of Story to Gameplay Ratio, perhaps irrevocably, while also single-handedly popularizing the Stealth-Based Game.

Six years have passed since Solid Snake, a special covert operative working for the United States military as a member of their FOXHOUND unit, infiltrated Zanzibar Land and assassinated the legendary soldier-turned-terrorist Big Boss. At the climax of the mission, Snake discovered that his best friend Gray Fox had been working for Big Boss, and was left haunted by the revelation that Big Boss was his real father.

FOXHOUND has gone rogue and taken control of a classified Alaskan nuclear disposal facility on Shadow Moses Island. Their new leader is a mysterious man who is the spitting image of Snake (long blonde hair aside), but calling himself Liquid Snake. They demand that the U.S. government turn over the remains of Big Boss and a ransom of $1 billion within 24 hours, or they will launch a nuclear strike against America. With the clock ticking down on their deadline, Snake must infiltrate the facility, ascertain the status of any hostages and whether Shadow Moses is really capable of launching a nuclear missile, and neutralize the traitorous members of FOXHOUND if necessary.

Metal Gear Solid became a huge hit for the PlayStation due to both its melodramatic (and incredibly juicy) plot and its satisfying gameplay; despite being the first 3D game of the franchise — hence the title's use of "Solid".

The game received a Japan-only Updated Re-release, Metal Gear Solid: Integral, which included a third disc of creative "VR Missions" (an expansion of the virtual reality tutorial from the original) to test players' skills. The VR Disc was later repackaged in North America and Europe as Metal Gear Solid: VR Missions and Special Missions, respectively, while Integral was used as the basis for a Microsoft Windows port in 2000 and later re-released onto GOG.com in 2020. In 2001, a direct sequel titled Metal Gear Solid 2: Sons of Liberty was released, which takes place two years after the events of this game and ramps the insanity of the plot. In 2004, the original Metal Gear Solid was fully remade for the Nintendo GameCube as Metal Gear Solid: The Twin Snakes.

The game's story was adapted into a graphic novel written by Kris Oprisko; it uses stylized, sketchy artwork by Ashley Wood that deliberately imitates Yoji Shinkawa's promotional art. The graphic novel itself was released in a semi-interactive format as Metal Gear Solid: Digital Graphic Novel on the PlayStation Portable. This same graphic novel and its sequel were eventually released on DVD in Japan as Metal Gear Solid 2: Bande Dessinée (with full voiceovers from the Japanese cast) and is included in English on the first disc of The Legacy Collection. There is also a novelization by Raymond Benson. 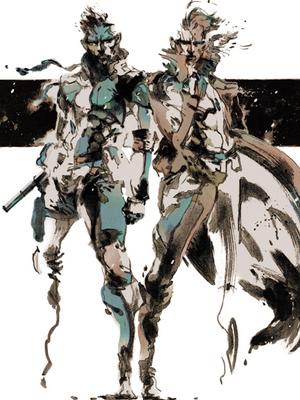 In 2004, the game was remade for the Nintendo GameCube as Metal Gear Solid: The Twin Snakes, co-developed by Canadian developer Silicon Knights, the creators of the Legacy of Kain series and developers of the highly acclaimed GameCube title Eternal Darkness: Sanity's Requiem.