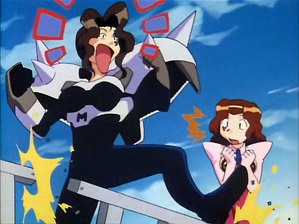 Two examples right there.
An audio-visual trope found primarily in cartoons, the Alertness Blink is a short chirping sound played when a character becomes aware of something. Usually associated with a flash near their head as a visual cue. Commonly comedic in nature. This trope originated in Western Animation before the advent of dialogue as a visual indicator of shock or surprise. It would often be accompanied by a sharp note.
Advertisement:

More often than not, associated with the realization of something that leads to Cross-Popping Veins, Luminescent Blush, Blank White Eyes, Color Failure, or the like. Beam of Enlightenment is a similar idea, but it's used differently. Idea Bulb is also similar. Compare Visibility Meter.

One common variation (often found in video games) is an ! rather than a random flash of light. There's also the "little crown" variation, most seen in anime. Compare Confused Question Mark.