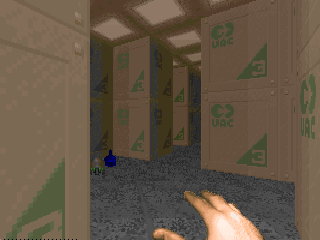 You'll never guess what the stage's
Start-to-Crate Rating was.
Callie: So many containers... I wonder what's inside them!
Marie: Wouldn't it be rad if it was all Squid Sisters merch?!
— Splatoon
Advertisement:

Our heroes find themselves at the docks. The baddie or monster is lurking somewhere nearby; unfortunately, there's a whole mess of shipping containers piled up everywhere, forming an environment like a maze. The containers all look similar, so searching for the target is confusing for both the heroes and the audience. There could be anything lurking around any corner, or in any of the containers...

Any environment with a large quantity of similar-looking stackable items is a great candidate for one of these, e.g. packing crates in a warehouse, or cardboard boxes in a storeroom.

For an added bonus, it can sometimes be set in a rail yard, where the maze may start shifting at any time and quite possibly crush either the pursuer or the pursued.

Not to be confused with a maze that's meant to contain something (Labyrinth of Crete).