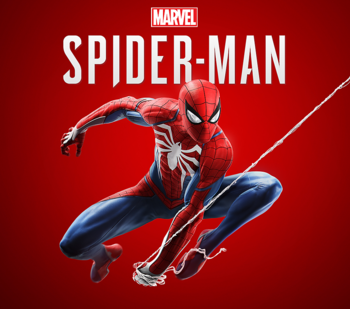 Be Greater.
"People see me and think they're safer. But it's not really me they're seeing. Probably for the best. Knowing that everything hinges on a guy from Queens sounds as scary as it feels. No pressure, right?"
— Spider-Man
Advertisement:

Marvel's Spider-Man is a Wide-Open Sandbox Superhero Action-Adventure video game, developed by Insomniac Games and published by Sony Interactive Entertainment exclusively for the PlayStation 4 on September 7, 2018. The game marks the first non-crossover Marvel Comics console game after the end of their relationship with Activision.

After 8 years of crime fighting and web-swinging, 23-year-old Peter Parker, aka Spider-Mannote of Earth-1048, finally manages to subdue and arrest Wilson Fisk, the biggest crime boss in New York City. While initially anticipating a time of peace, instead the web-head finds out that many smaller parties are eager to fill the void that Fisk left. With a new gang called "The Demons" on the rise, and new villains emerging from the shadows, Spider-Man faces one of his biggest challenges yet as a crime wave sweeps throughout the city, forcing him to fight as hard as he can to maintain peace.

The game released on September 7, 2018. There is also a series of post-release DLC campaigns, collectively known as The City that Never Sleeps:

This version of Spider-Man was later inducted into the Marvel Multiverse as the Peter Parker of Earth-1048. He made his comic book debut in Spider-Geddon by Christos Gage (co-writer of the game's script). It was announced that in March 2019, the events of the game, along with behind-the-scenes paraphernalia and commentary will get a comic book adaptation in Marvel's Spider-Man: City at War, a 6-issue series written by Dennis Hopeless and illustrated by Michele Bandini.

A remastered version of the game, as well as a new Interquel, Spider-Man: Miles Morales, were launch titles for the PlayStation 5 in November 2020.

A direct sequel, Marvel's Spider-Man 2, is currently in development for the PS5 for a 2023 release and Insomniac is also developing a Wolverine game which will be set in the same universe.

open/close all folders
Tropes A to D
Tropes E to Q
Tropes R to W
In memory of Steve Ditko, who, with the stroke of his pen, made the world amazing.
In memory of Stan Lee, who inspired us all to be greater.
Feedback

Example of:
You Have Outlived Your Usefulness