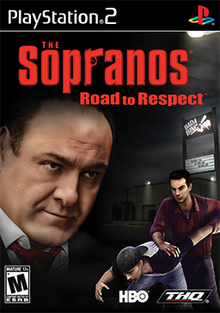 Based on the popular TV show The Sopranos, Road to Respect is a PS2 exclusive Action-Adventure game released in 2006.

Taking place between Season 5 and 6, you play as Joey LaRocca, bastard son of Salvatore "Big Pussy" Bonpensiero. He's a recent recruit to the Soprano family, and as him, you must prove yourself in order to rise to the top.