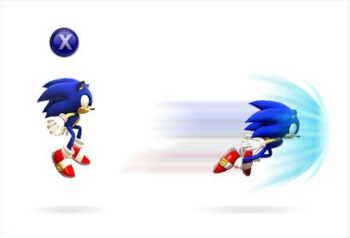 In real life, people can't magically propel themselves forward through the air as if they were bounding off an invisible wall. In the realm of fiction though, especially in Video Games, this is a common and effective form of movement.

Air-dashing is a unique movement option from more basic actions like running and jumping. It grants an added boost of horizontal or lateral movement which can have a number of useful applications either as a traversal mechanic or a power in a story.

Many platforming heroes use this as a tool to traverse the game world and reach objectives. 3D games may be more limited with this ability since with the exception of jumping, most movement is lateral, making it difficult to precisely aim a dash across a three-hundred-and-sixty degree radius. 2D platformers meanwhile have the benefit/constraint of a flat plane, which gives the player a full radius of directions to dash in.

Air-dashing is a common ability in many 2D fighting games, some mainstream examples being the works of Arc System Works, Capcom and French Bread.note creators of Melty Blood and Under Night In-Birth Air dashing gives characters another option for advancing towards an opponent and be applied in all sorts of mix-upsnote The act of using a variety of attacks or maneuvers that require specific defensive options to counter or be used to cross over an opponent to attack from behind.

How an air dash actually happens is a whole other question. It may be the result of magic or superpowers that let a character bound across the air. Technological characters like robots might have thrusters that perform a similar function. Other times it could just be pure cartoon physics at work.

This trope can overlap with offensive abilities like Dash Attack, but for the most part is limited to being purely for mobility rather than attacking.

A sub-trope of Videogame Dashing.

Compare to Flash Step, Double Jump, and Not Quite Flight.