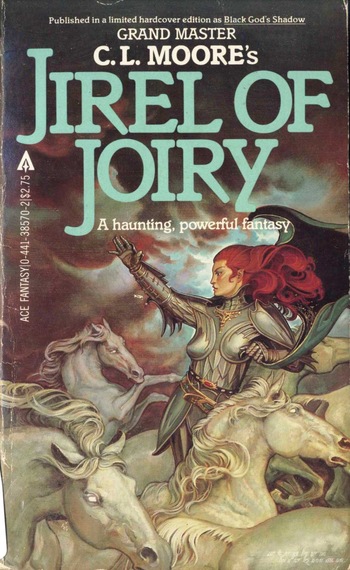 Jirel of Joiry is riding down with a score of men at her back,
For none is safe in the outer lands from Jirel's outlaw pack;
The vaults of the wizard are over-full, and locked with golden key,
And Jirel says, "If he hath so much, then he shall share with me!"
And fires flame high on the altar fare in the lair of the wizard folk,
And magic crackles and Jirel's name goes whispering through the smoke.
But magic fails in the stronger spell that the Joiry outlaws own:
The splintering crash of a broadsword blade that shivers against the bone,
And blood that bursts through a warlock's teeth can strangle a half-voiced spell.
Though it rises hot from the blistering coals on the red-hot floor of Hell!
— Jirel's Bragging Theme Tune from Quest of the Starstone.

Jirel of Joiry is the heroine of a series of Sword and Sorcery short stories by C. L. Moore, running from 1934 to 1939 in Weird Tales. Notable for being the first female Fantasy hero. The stories are:

Modern readers may have been introduced to Jirel through the popular Filk Song "Jirel Of Joiry" written by a young lyricist who later went on to become a noted Feminist Fantasy author herself, Mercedes Lackey.

Tropes found in these stories: