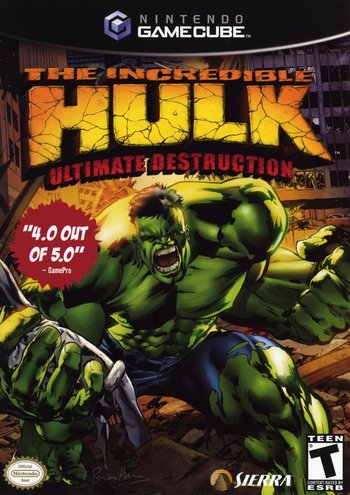 Mooks won't like him when he's angry — but we do.
"There's a thin line between good and bad. I walk that line every single day. When I stray from it, people die. My name is Bruce Banner and this is me. I'm not a person anymore, I'm the Hulk. I did this to myself, all in the name of science. This is me, all that I've become. I'm a big, green time bomb. And I'm ticking."
— Opening Monologue
Advertisement:

A Wide-Open Sandbox video game based off the comic book The Incredible Hulk, developed by Radical Entertainment and released for the PlayStation 2, Xbox and Nintendo GameCube in 2005.

Bruce Banner (Neal McDonough) is struggling to rid himself of the Hulk persona, but he is dying slowly from the effects of the machine he is using to attempt to get rid of it. He is attacked by General Thunderbolt Ross (David Thomas) and Emil Blonsky (Ron Perlman) and is forced to abandon his studies. He takes refuge with Doc Samson (Daniel Riordan) and continues to attempt to find a cure with his aid, but another force is hunting him along with the military...

The game was a follow-up, but not a sequel, to the lackluster game based off the 2003 movie. Unlike that game, which took place mostly indoors and omitted the three mile leaps, the designers took full advantage of various comic continuities and made the game into a sandbox, taking cues from the immensely successful Spider-Man 2 video game. Graphical power was traded for the ability to smash just about everything on screen in a variety of ways, which proved immensely entertaining and made the game a critical and commercial success. Many argued that it was the first video game to truly make players feel like the Hulk.

No sequel was ever announced, but here's hoping. The closest gamers may get is [PROTOTYPE], made by the same development company with many identical gameplay features carrying over. 2008's The Incredible Hulk game made to tie in with the movie being released at the time may also be considered an attempt at a sequel to this game, but most consider it inferior to Ultimate Destruction.