Video Game / The Incredibles: Rise of the Underminer 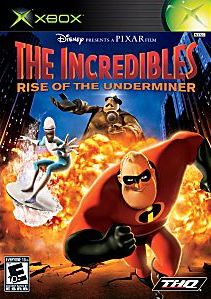 Picking up where the first film left off, the Underminer unleashes his army of giant drills and robots on Metropolis, intent on decimating the Earth's surface. Mr. Incredible and Frozone team up to stop him, with the rest of the Incredibles staying behind as the duo follows the Underminer underground to thwart his nefarious schemes and destroy his various doomsday devices.

The home console and Windows version is a co-op beat-em-up platformer for one to two players, taking control of either Mr. Incredible or Frozone. Solo players can switch between the two at will, with the inactive character being controlled by the computer. The AI player can be told to follow closely, act aggressive, or stay still with the D-pad.