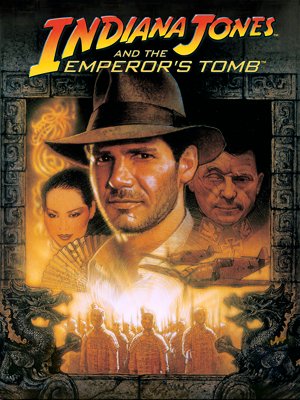 Indiana Jones and the Emperor's Tomb is a third-person Action-Adventure game developed by The Collective (using the same engine they developed for Buffy the Vampire Slayer) and published by LucasArts. It was released on February 24th, 2003 for Xbox Note (and it was later made compatible with the Xbox 360 and Xbox One), then ported for Macintosh and Windows on March 25th, 2003, and for PlayStation 2 on June 26th, 2003.

The story is set in 1935, just before the events of Indiana Jones and the Temple of Doom, and involves a quest to explore the tomb of the first Emperor of China, Qin Shi Huangdi, and retrieve the mystical Heart Of The Dragon.

After a Forced Tutorial level in the jungles of Ceylon, the quest proper takes Indy to Prague, Istanbul, Hong Kong and on into China. On the way, he must run, puzzle-solve, platform-jump and fight his way past ivory hunters, Nazis, Turkish mercenaries, Nazis, Chinese gangsters, Nazis and Chinese cultists, before finally entering the titular tomb for the climax.