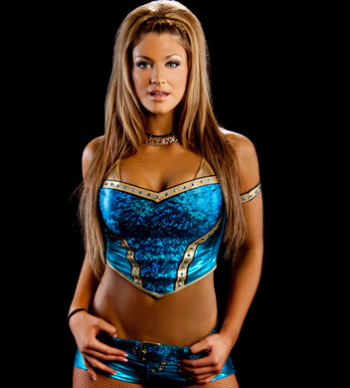 Everything I want. Everything I need.
"No one can control you unless you allow them to. You are the master of your own happiness. You create the life you want to live in."
Advertisement:

Eve Torres Gracie (born Eve Marie Torres on August 21, 1984 in Boston, Massachusetts and raised in/billed from Denver, Colorado) is a female American retired professional wrestler who has competed exclusively in WWE. She won the final Diva Search competition in 2007. She initially featured as a backstage interviewer on WWE Smackdown, but transitioned to in-ring work in 2009.

In 2010 she became the first Diva Search winner to hold the WWE Divas' Championship, and as of 2012 she became the first three-time Divas' Champion. She was heavily featured across the company for the majority of her tenure, and announced her surprise retirement in early 2013 - the very night she lost her title to Kaitlyn. Since leaving wrestling she has ventured into acting, with a recurring role on Matador and a guest spot as Maxima on Supergirl (2015).