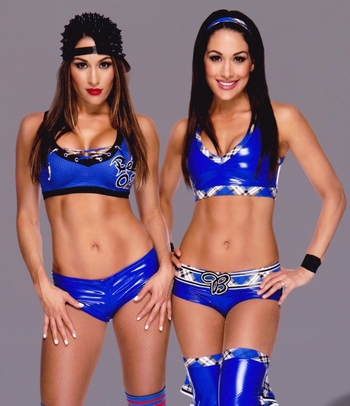 Nikki (left) and Brie (right).
"You can look, but you can't touch!"
Advertisement:

Brianna Monique Danielson (nee Garcia-Colace) and Stephanie Nicole Garcia-Colace (born on November 21, 1983) are better known as WWE Divas Brie and Nikki Bella, commonly known as The Bella Twins. They are best known for their use of "Twin Magic," in which they switch places to fool their opponents. Each Bella has held the WWE Divas' Championship, Brie once and Nikki twice. In addition to their WWE careers, they are notable for starring in Total Divas.

Brie took an extended break from wrestling in 2016 to start a family with her husband, Bryan Danielson, while Nikki got engaged to John Cena before they split up in April 2018. As of 2019, both twins have retired from wrestling.

Tropes associated with the Bella Twins: