Girly Girl with a Tomboy Streak 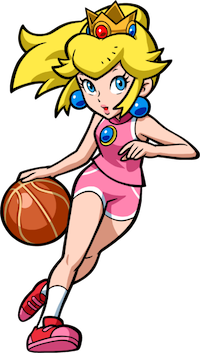 She may be a princess, but her basketball skills are just peachy.

This is a Girly Girl who has some tomboyish qualities or interests. She could have an interest in boys sports, hate the color pink or love boyish colors, not mind getting messy, be a Big Eater, or hate dresses and wear baggy pants. Perhaps she was once a tomboy who had a Girliness Upgrade and never did quite do away with aspects of her old tomboyish personality (in which case Tomboy Angst doesn't apply). Sometimes, Depending on the Writer, she may be the more boisterous one when that's usually the tomboy's job in their Tomboy and Girly Girl dynamic and the tomboyish one becomes more softspoken, though it doesn't always stick. Note that being an Action Girl is not tomboyish by default, as a Lady of War and a Girly Bruiser can attest.

Inversion and normal foil is Tomboy with a Girly Streak. Distaff Counterpart of Real Men Wear Pink, a Manly Man with a Sensitive Guy streak.