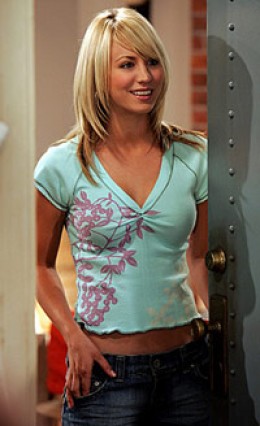 Played by: Kaley Cuoco
Voiced by:: Mireya Mendoza (Latin-American Spanish dub)
"You know where I was all afternoon? Auditioning with fifty other blondes for an anti-depressant commercial... They said I was too perky..."

Nebraska-born neighbor of Leonard and Sheldon, moved there in the pilot. She aspires to be an actress, but to pay the bills she works as a waitress at the Cheesecake Factory. Initially friendly but distant to the guys, she grew to become One of the Boys. She has an average intelligence which is overshadowed by being around these super-geniuses, but displays common sense and social awareness that the others almost completely lack. Her relationship with both Leonard and Sheldon opened her up to the concept of higher thinking and she has found some difficulty going back to keeping "regular" people as company.