Literature / Rarity and the Curious Case of Charity 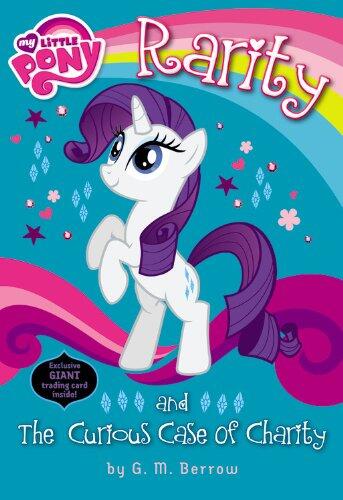 "Rarity is excited to welcome her new apprentice, Charity, to Ponyville. Rarity is sure that the two of them will become best friends, bonding over their love of fashion and glamour. But after Charity dyes her mane and tail to look more like her mentor, and begins to copy the fashionista's every move, Rarity realizes this pony is a problem!"

The fourth note excluding an Equestria Girls novelization officially licensed My Little Pony: Friendship Is Magic chapter book of a series of books by G. M. Berrow, and part of the overall My Little Pony Generation 4 universe. Just like the previous three books, this also takes place some time after season threenote With one line in particular suggesting that it takes place in the middle of season 4. Rarity is selected to be a part of a mentoring program that would allow up-and-coming fashion designers to learn from the pros. She soon meets her apprentice Charity Sweetmint, who turns out to be a big fan of Rarity's work and the two hit it off fairly well. However, things become difficult when Charity takes her idolization of Rarity too far.