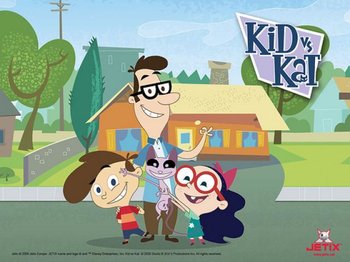 Kid vs. Kat is a Canadian animated television series created by Vancouver-based animator Rob Boutillier. It was developed and distributed by Studio B Productions for Jetix Europe (later Disney XD) and YTV.

The feature revolves around a 10-year-old boy named Coop Burtonburger, whose idyllic suburban life shattered when his little sister Millie adopts a stray Sphinx cat who is in fact an evil alien invader bent on taking over the world. Coop engages in a constant battle with the feline alien (named Mr. Kat by Millie) to foil its schemes of conquest. Being the only person aware of Mr. Kat's true identity (other than his best friend Dennis and love interest Fiona), Coop also tries to expose Millie's pet for what it really is, but in the end Kat ends up destroying the evidence leaving Coop to be deemed a fool.