Film / Trail of the Pink Panther 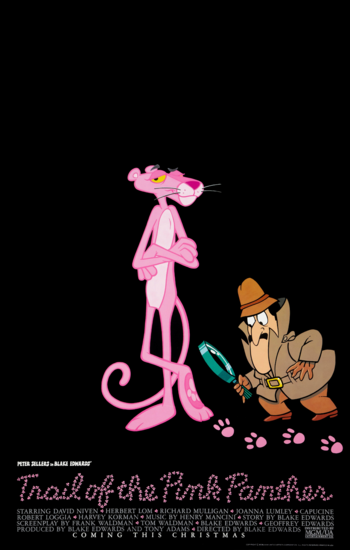 "The trail that always leads to laughter..."
Advertisement:

Trail of the Pink Panther is a 1982 crime/comedy film and the seventh installment in The Pink Panther franchise, once again directed by Blake Edwards. This was the first film in the series to be created after the death of Peter Sellers, and utilized previously-unused footage of Sellers as Clouseau from the previous films.

For the third time in the series, the Pink Panther diamond is once again stolen in Lugash. President Haleesh requests the aid of Inspector Clouseau, seeing how he had managed to find the diamond before, much to Dreyfus’ continuing chagrin. While Dreyfus wallows away in his psychiatrist’s office, Clouseau bungles around the city before boarding a plane to Lugash.

Then he goes missing.

This news catches the attention of French television présentatrice Marie Jouvet, who decides to seek out some of Clouseau’s old friends, including his senile father, to learn more about his life and, against everyone's best wishes, find out what's become of him.