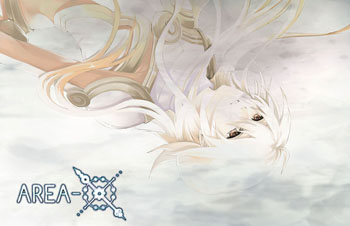 Years into the future, humanity's technology has reached great advances, but at a cost: over time, they have also depleted their natural resources and rendered Earth a barren wasteland, forcing humans to retreat underground and build a new life for themselves there. However, a new hope exists for them in the form of Project Recovery—through the use of a time machine, attempts may now be made to travel to other dimensions and obtain their resources.
Advertisement:

The Time Negotiator chosen is a 17-year-old girl named Elcia. What was initially meant to be a job taken purely for the money, though, ends up going awry when she arrives in a mysterious world known only as Area-X to her organization, strangely resembling a landscape she often sees in her dreams. From there, she begins to unravel the mysteries of her past, and discovers a secret that threatens all of the timelines...

Area-X is a Visual Novel/Otome Game produced by Zeiva Inc, and is the second entry in the Otome-X series as well as a prequel/spin-off to X-Note. Much like its predecessor, the story follows the heroine as she chooses a path—and, by association, a Love Interest—and attempts to solve the mystery behind her circumstances.

Warning: This page assumes that you have played X-Note. Unmarked spoilers ahead.