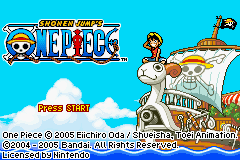 One Piece is a 2005 Action Game for the Game Boy Advance, based on the manga One Piece, developed by Dimps and released exclusively in America, unlike many others which were or still are exclusive to Japan. A genre shifted prequel to One Piece Grand Battle: Swan Colosseum that recycles its sprites and music into the Dragon Ball: Advanced Adventure engine, it has a higher focus on platforming and features six chapters, covering Luffy's adventures in East Blue from when he recruits Zoro to when his crew escapes from the marines in Logue Town.
Advertisement:

Playing the game shows that the developers were indeed fans of the manga and got many details down to spec (especially in a few of the boss battles). Though as the series was under 4Kids license at the time it does have some of the naming conventions ("Cursed Fruit" instead of "Devil Fruit", "Chaser" instead of "Smoker", "Gum Gum Blast" instead of "Gum Gum Pistol", etc).