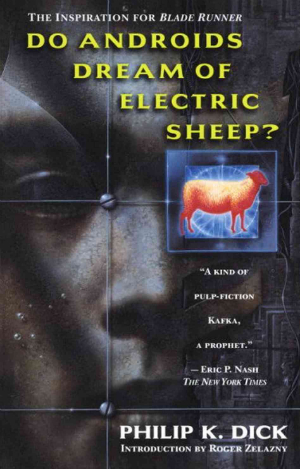 A 1968 novel by Philip K. Dick about escaped androids trying to pass for humans in a dystopian future, and the people whose job it is to hunt them down. The book is notable for film fans as being the source material for Blade Runner.

In the distant future of the 1990s, nuclear war has destroyed nearly all life on Earth. Almost all animals are extinct, and only a fraction of the human race remains on Earth. Those left behind are either unwilling to leave, or are "specials" (called "chickenheads" or, in severe cases of mental damage, "antheads"), who are ineligible to leave due to overexposure to fallout. The people on Earth give their lives meaning by taking care of the last animals that are left on planet. As a proof of their empathy and humanity, those who can't afford a real animal inevitably end up buying an electric model instead; it's considered antisocial, if not downright sinful, to not have an animal to show the neighbours.

Most of humanity has emigrated throughout the solar system, rebuilding civilisation along with their organic android slaves ("andys") to do the hard labour. Androids have advanced to the point where they look completely human inside and out, but exhibit certain psychological differences and are not officially recognised as alive. Naturally, there are some androids who try to flee from a life of slavery and pass as human on Earth.

But being non-human, the androids are excluded from the experience of "Mercerism", a religion based around respect for all life, and the shared empathy of all the human race. People can connect together using "empathy boxes", bonding over the shared visions of The Messiah figure Wilbur Mercer. Most of humanity on Earth follows Mercerism, but the religion is ridiculed by famed comedian Buster Friendly, whose shows on TV and radio "Buster Friendly and His Friendly Friends" broadcast 23 hours a day each and who seems determined to bring Mercerism down for good.

Rick Deckard is a bounty hunter working for the San Francisco police department. He's assigned to hunt down and "retire" six Nexus-6 androids who have escaped from Mars, after the previous man on the case was left critically injured. His task is complicated when Deckard meets Rachael Rosen, a beautiful young woman associated with the leading android manufacturing company, and he begins to question the morality of his job. Deckard's life isn't going quite the way he wanted: he's stuck on earth, his wife has discarded artificial moods in favor of actual depression, and his sheep is electric.

Meanwhile, John R. Isidore — a chickenhead who lives alone in a decaying apartment building — finds that somebody else is now living in another apartment. It's a beautiful young woman named Pris Stratton, who calls herself "Rachael Rosen", then abruptly changes her story. She is cold and dismissive towards him at first, but later appeals to him for help: she has friends who have to come and hide out with her, because there's a bounty hunter trying to kill them. J.R. Isidore, who has never had a friend, is eager to help...

As in most Philip K. Dick novels, the characters are all extremely confused about their identity and their surroundings. Some plot twists are overly obvious from the start, and although the novel never explicitly states why the characters don't notice them easily, it can be assumed that every person in the novel suffers from some level of fallout-related brain damage and detachment from reality. The result is a very dreamy, expressionistic story that has become one of Dick's most popular works.

Do Androids Dream of Electric Sheep? provides examples of: