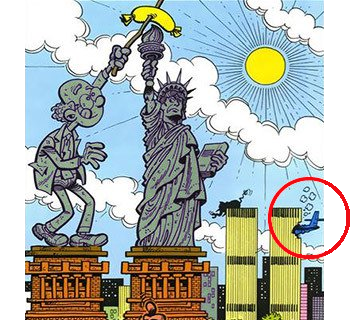 1992: Funny Background Event
2001: Tasteless joke
"But that joke isn't funny anymore
It's too close to home
And it's too near the bone,
More than you'll ever know"
— The Smiths, "That Joke Isn't Funny Anymore"
Advertisement:

Harsher in Hindsight is a certain event, plotline, joke or saying where a later event (in the story or real life) comes up to make it worse. It can lead to episodes or issues being pulled or held from re-running if executives want it to be Distanced from Current Events.

This leads to a rather heartwrenching moment and makes some people feel uneasy when they view the event in the original work.

It is different from Does This Remind You of Anything?, which is for works released shortly after the tragic event, and where the similarity in the plot is intentional. Note, however, that there is usually a delay between the creation of a work and the day when it finally becomes available to the public, and sometimes a tragic event similar to a point from the plot takes place in the meantime. Sometimes the work is slightly modified to avoid this effect, but sometimes doing so would change it so much, or would demand so many resources, that the work is released anyway as it was initially conceived.

Note that if the event in question is something inevitable, such as actors dying, that's not necessarily this. We all have to go at some point. It would only be this trope if the death was somehow similar to how they died onscreen. It is possible that the actor portraying a sympathetic character turns out to be a heinous person, but that is not enough to deem all of their scenes as harsher in hindsight; the moment in the work must be somehow related to their heinous actions then felt worse because of the scandal.

This trope usually relates to certain events and plot twists, so beware of unmarked spoilers!

Note: Examples can only be added once the event that makes them harsher has ended. In particular, anything related to a widespread disease, basic hygiene, hoarding of any kind, or something similar to social distancing doesn't inherently mean that there's a connection to the COVID-19 Pandemic. Please don't add examples of this nature.