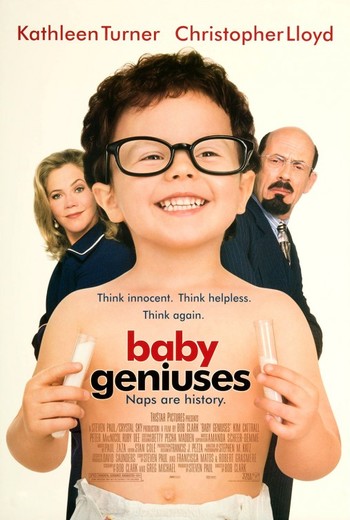 The film relies on the premise that some babies possess profound knowledge of the universe from birth, but as they grow older and learn to talk, they "cross over" and lose all of this knowledge. Dr. Elena Kinder (Turner), CEO of BabyCo, is studying several such baby geniuses as an experiment to develop the "Kinder Method" of child rearing, which will result in children having superior intelligence as they mature. To demonstrate her methods are valid, she arranged for a pair of identical twin boys to be born to a surrogate; one of them, Sly, was taken by BabyCo and raised and educated in their secret lab, while his brother Whit was adopted by Kinder's niece Robin (Kim Cattrall) to be raised in a normal environment. Robin's husband Dan (Ally McBeal star Peter MacNicol) is researching infant pre-language, and suspects he may be able to remember how to speak to babies in their own language.

Sly manages to escape the BabyCo lab and runs into Whit at a playground in a mall, and Kinder's goons capture Whit while Robin takes Sly home, each believing they are the other. Sly rallies the other babies at Robin's orphanage to bust into BabyCo to rescue Whit and stop Kinder's schemes, and Kinder finds out about the switch and tries to recapture Sly and begins experimenting on Whit in the meantime, while the other babies under Kinder's care decide to help Whit.

It was followed by a sequel, Superbabies: Baby Geniuses 2, which starred Jon Voight, in 2004. Clark planned a third movie, which has been released as a Direct to Video movie titled Baby Geniuses and the Mystery of the Crown Jewels (which was originally going to be a TV show called Baby Geniuses: Baby Squad Investigators), but since he died in 2007, a new director had to come in, Sean McNamara. A fourth movie has been released too, and a fifth soon followed.