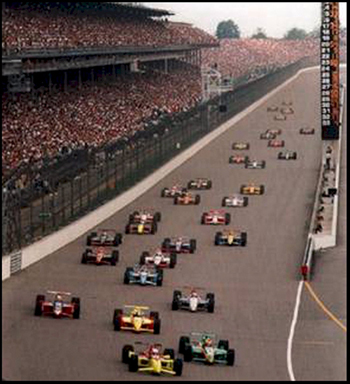 Back home again in Indiana.
Advertisement:

IndyCar, known formally and officially as the NTT IndyCar Series as of 2019, is perhaps the greatest racing series in the United States...that everyone forgot.

The series is named for the annual Indianapolis 500, which has been hosted every year since 1911 (with the exception of during World Wars I and II). The cars are open-wheel, open cockpit single seaters, very similar to Formula One, although the differences between the two are many.note Specifically, Indycars are much less technologically advanced than F1 cars, lacking assists like power steering and traction control, and they also all share the same chassis.IndyCar, once the pinnacle of American motorsports, has slowly declined in ratings and popularity over the past 25 years as NASCAR became popular for its wild, down-to-earth appeal. Even today, the Indianapolis 500, the crown jewel in the series schedule, is normally overshadowed in the ratings by just about any NASCAR race during the year.note With special mention to the Coca-Cola 600, which NASCAR runs in primetime on the same day as the 500. The Indy 500 is still, however, the largest single-day sporting event on the planet in terms of live attendance. Yes, even bigger than the Super Bowl. Permanent seating capacity at the Indianapolis Motor Speedway is just over a quarter of a million seats, which alone makes it the highest capacity sports venue in the world, but with extra infield capacity that's put into place for Raceday, attendance of the annual event routinely tops 400,000.

The reason for the decline stems from a split within the series in 1979. Back then, the United States Automobile Club (USAC) had organized and run the Indianapolis 500 as well as other American championship car races since 1956 (when the original sanctioning body, the American Automobile Association - yes, the same stranded-by-the-side-of-the-road AAA today - withdrew from motorsport management). However, many prolific team owners such as Dan Gurney, Roger Penske, and U.E. "Pat" Patrick had long disagreed with USAC due to alleged ineptitude on the organization's part. As a result, they formed Championship Auto Racing Teams, (CART) which was founded as an advocacy group to keep USAC in check. However, such an agreement was flat-out denied by USAC bigwigs, which then led to CART becoming its own breakaway series. After several years of legal battling, USAC finally allowed the Indianapolis 500 to be part of the CART calendar, and all was good. CART enjoyed immense success in America as drivers such as Emerson Fittipaldi, Mario Andretti, and Nigel Mansell, coming off of highly successful Formula One drives, touted its competitiveness. The series was once considered to be on par with F1 for that reason along with the fact that it was starting to struggle competitiveness and racing wise, but also because small backmarker teams were starting to drop like flies, and political tensions involving both drivers and series managers were heating up.

But then, things changed.

In 1994, Indianapolis Motor Speedway owner Tony George became dissatisfied with CART's arbitrary rules (CART was often accused of changing rules to benefit certain teams), escalating costs (which squeezed out small teams similar to F1), lack of American driver presence (only 10 Americans raced in 1995), and increasing emphasis on road course racing. In response, he teamed up with USAC and created the Indy Racing League (IRL), using the Indianapolis 500 as leverage to get the series off the ground. IRL was created to be a cheaper, all-oval, all-American alternative to CART, and George enforced it by in 1997 allowing the top 25 drivers in his series a guaranteed spot in the Indianapolis 500, leaving only eight spots on the grid to CART regulars. This so-called "25/8" rule was very controversial as it was the first time since the Indy 500 began that the race would not necessarily start the fastest qualifying cars.

CART, outraged, filed a lawsuit in 1996, which ultimately ended in a settlement and the legality of the new series. In response they created a race called the "US 500" to be run at Michigan International Speedway the same weekend as the Indianapolis 500. The US 500 was touted as the 'real' 500 where CART teams would show their technical superiority to the "CART rejects series". However, this boast backfired when, in the very first US 500 race, the front row drivers collided on the formation lap — leading to a multi-car pileup before the race even began and a major delay while backup cars were prepared to restart it. Meanwhile at Indianapolis, in addition to Dutch star Arie Luyendyk setting both the track and qualifying records - 237.498mph and 236.986mph, respectively - the race ran smoothly (although qualifying had been tragically marred by the death of veteran driver Scott Brayton) but was severely lacking in star-power and was won by by a relatively unknown driver (Buddy Lazier, who had been a makeweight in previous races). Most pundits observed that for all intents and purposes neither side had really "won" anything and that some kind of peace deal was urgently needed. The US 500 was never run on Memorial Day Weekend again. It was moved to July for the three following years, taking up Michigan's usual July date on the CART calendar. Michigan kept its July date for 1996, in addition to the U.S. 500, meaning CART raced there twice that year, which wasn't unusual as CART did so during most of the 70s and 80s, though the second race was always a much shorter distance than the first; in '96, both races were 500 miles; the July '96 race was infamous for Emerson Fittipaldi's career-ending crash and subsequent injury, then the US 500 name was abandoned.

However, in 1997, George and IRL announced new technical regulations and commissioned new car and engine designs effectively outlawing CART-spec cars from competing at Indy. The impasse remained from 1997 to 1999 as few CART teams were inclined to invest in new cars purely for one race. In 2000 however, CART champions Target Chip Ganassi Racing did purchase cars, entered Indy and CART champion Juan Pablo Montoya, and won the race with him - the first time since 1966 a rookie had won. The following year, the CART Penske juggernaut followed suit and won with another first-timer, Helio Castroneves. Although the crushing superiority of Montoya and Castroneves's wins were somewhat embarrassing for the IRL teams, they were something of a Pyrrhic Victory for CART, as the IRL held the one card the CART series couldn't: the Indianapolis 500. The tradition and prestige of Indy completely overshadowed everything else and CART's leading teams, Penske, Ganassi, and Andretti, found it increasingly difficult to justify staying away from the big race to their sponsors. Eventually, they bowed to the pressure and abandoned the series for IRL.

Now on the decline, CART began to get desperate. Trying to outdo IRL with a race at Texas Motor Speedway in 2001, they found that the new overwhelming performance of the cars led to many drivers coming close to blacking out under the extreme g-forces imposed. Forced by the series doctors to cancel the race for medical reasons, CART took a huge blow in prestige, which was then compounded when a row over engine rules resulted in key engine manufacturers Honda and Toyota defecting to IRL. CART tried to pick up the pieces in 2003 by reforming under the name "Bridgestone Presents The Champ Car World Series Powered by Ford (Champ Car)." After declaring bankruptcy in 2003 and again in 2008, Champ Car was finally bought out by IRL.

In the final twist of the saga, George was voted out of his position at the head of the series by his own sisters, allegedly angry at the amount of family money that had been spent over the years, and a new boss was brought in (Randy Bernard, a former head of Professional Bull Riders). Bernard was however fired after the 2012 season and he was replaced by Mark Miles, a former tennis promoter. Now the 'IRL' name is largely history too, and the series is officially the 'NTT IndyCar Series', a series contested between US and non-US drivers on oval, street and road courses.

The 2012 season saw the introduction of a newer formula car, tested by double Indy 500 winner Dan Wheldon. Tragically, Wheldon was killed in the last race for the car that dated back to 2003 at the finale of 2011. This race saw 34 entries (one more than the Indy 500) and was held on the 1.5 mile Las Vegas Motor Speedway. A large number of cars bunched together on the relatively short track led quickly to an appalling case of Disaster Dominoes where one car clipped another, which hit another, which hit another, while other cars were hitting each other trying to avoid the earlier ones. Though there had been big pile-ups before (perhaps the worst example of this was in the 1966 Indy 500, where eleven cars were involved in a pileup just before the green flag) this crash left the track looking like a warzone and the race was canceled, making for a tragic coda to the "IRL" age. Fortunately, the DW12 car (named in tribute after Wheldon's initials) has proven to be racier and less prone to pack racing as it's predecessor, though its rather awkward looks drew derision from many fans. In 2018, the car was given an Adrenaline Makeover facelift. The chassis is the same underneath, but there was a raft of bodywork changes designed to improve overtaking by increasing downforce from the underfloor and reducing it from the wings. Removing the manufacturer-specific body kits reduced costs - especially helpful to small teams - and the controversial rear wheel guards were removed, as they were deemed ineffective as safety devices and a needless source of potentially dangerous debris. The car was also made to look sleeker by replacing the airbox with a roll hoop and lengthening the sidepods. The last was also deliberate retro nostalgia Fanservice by recreating the fan-favorite 1990s CART-era car aesthetics.

In late 2019, business tycoon and longtime team owner Roger Penske made a deal to buy the IndyCar series and the Indianapolis Motor Speedway from the Hulman-George family. With his deep pockets and long record of fielding championship-winning race teams, most fans are optimistic that Penske will increase the series' visibility and popularity. The year 2020 also saw the debut of the new "Aeroscreen", designed to protect the drivers better. The aeroscreen initially had a lukewarm reception because of how it looks from the front, but two incidents in a single race

at Iowa Speedway changed all that. The same year, the Indy 500 was run without fans and in August for the first time because of the COVID-19 Pandemic.