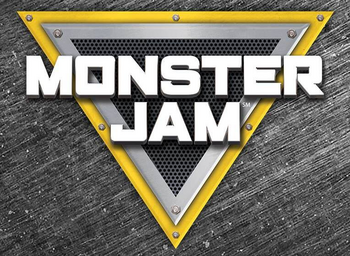 is generally accepted to be the largest and best known monster truck competition series. Now owned by former circus promoters Feld Entertainment, it is the direct descendant of three major promoters of yesteryear - the United States Hot Rod Association, TNT Motorsports, and USA Motorsports - and it has evolved those shows into something of a motorized mix of the NHRA, X Games, and Professional Wrestling.
Advertisement:

Unlike other motorsports, Monster Jam not only focuses on racing, but also has freestyle and best trick competitions during events. Racing generally takes the shape of one on one elimination races over obstacle courses, while freestyle and other competitions use the remainder of the show floor's skatepark-style jumps and ramps.

The monster trucks that give Monster Jam its name are required to have 66-inch tall tires, supercharged, methanol fueled V8 engines, and weigh 10,000 pounds. Each truck is given a name and a theme and its fiberglass body is shaped and painted to fit that theme. The trucks themselves take promotional precedence over the drivers, and fans generally care more about Grave Digger vs. Max D rather than Adam Anderson vs. Tom Meents. The over-the-top nature of the trucks tends to give outside observers the idea that shows are rigged like in professional wrestling, but to the contrary events are completely unscripted – the unpredictability is what makes the sport entertaining.

While most trucks are owned by, and drivers contracted to, parent company Feld, independently owned trucks are also booked for many shows, and some Feld-owned teams are given a fairly free hand, including running their own shops, in part to keep the competitive factor in the series.

The main competitive season, which runs from January to April, features multiple tours, including flagship football stadium events and smaller arena tours that run in both smaller cities and cities where the outdoor stadiums are too cold during the season. At the end of the main season, in early May, the winners of the respective tours, along with other invitees, compete in the Monster Jam World Finals, which were held annually in Las Vegas until 2019, when they moved to Orlando. Following World Finals, various exhibition tours are held, including a major stadium one in the northeastern US to hit up the cities that were too cold during the main season, and some international dates.

Beyond live events, Monster Jam also encompasses a TV show, video games, and multiple toy lines. There is also now an international tour that brings such fine American entertainment to the rest of the world.

TV Tropes! This! Is! The Monster Jam Tropes Section!