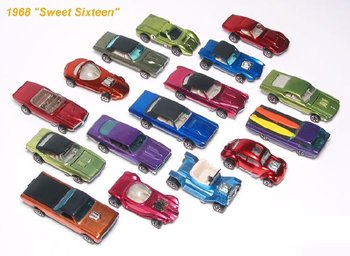 The original "Sweet 16". There's more where they came from. Many, many more.
Advertisement:

Hot Wheels is a brand of miniature diecast toy cars produced by the toy company Mattel. The series began in 1968 with the release of 16 cars (known as the "Sweet 16") and quickly became a massive success.

The toy cars are often based off of real life cars, but there are several completely original designs as well. A lot of variants and subseries of Hot Wheels cars have been released, which tend to have a particular gimmick not found in the main series' toy cars (for example, one common type of Hot Wheels car is one that changes color when submerged in hot or cold water). Many racetracks and similar playsets have also been released which are intended for use with the toy cars; the racetracks are assembled via snap-together pieces and tend to contain a motorized speed booster piece which allows cars placed through them to speed through the track.

The franchise's popularity has led to it being adapted into animated form several times. For tropes from the animated films and TV shows, as well as adaptations in other media, refer to the franchise index here.