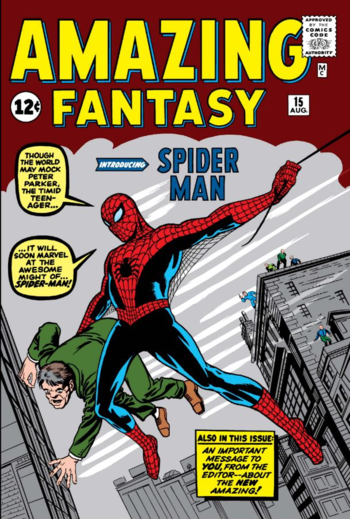 Spidey's first appearance, August 1962.note Cover by Jack Kirby
"And a lean, silent figure slowly fades into the gathering darkness, aware at last that in this world, with great power, there must also come—great responsibility! And so a legend is born and a new name is added to the roster of those who make the world of fantasy the most exciting realm of all!"
— The Narrator, Amazing Fantasy #15, complete full closing caption. Written by Stan Lee.
Advertisement:

Please note that this page covers the Spider-Man comics only, for tropes pertaining to all Spider-Man media, see the franchise page. For the title character, see Spider-Man: Peter Parker.