Evil Has a Bad Sense of Humor 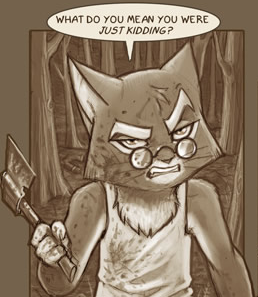 Don't axe questions you don't want to know the answer to.
"Well, give the man a hand!"'
— Clarence Boddicker after dismembering Officer Murphy's hand in RoboCop (1987)
Advertisement:

For some reason, capital-E Evil and most villains just don't get humor. And we don't just mean in a "doesn't understand the joke" sense; they're usually completely humorless or they're cackling because they're complete lunatics and "Eeeeevil!" Maybe it's because of some implicit assumption that "laughter heals the soul", so someone who doesn't laugh or laughs at the wrong things can't be right in the head. Perhaps it's that humor requires perspective, which villains usually don't have in abundance.

The point is, you'll never see a villain who moonlights as a successful stand-up comic in the Muggle world.

This manifests in two different ways.

Contrast Affably Evil. Tension-Cutting Laughter is a subversion. See also No Sense of Humor. Often, this may result in a Laugh with Me! moment.

Alternative Title(s): Evil Has A Bad Sense Of Humour