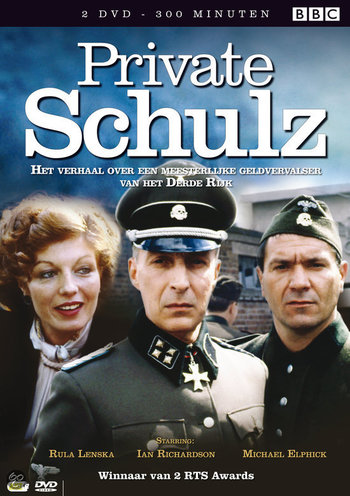 Not to be confused with Sergeant Schultz.
"Well, what do you do when the lunatics take over the asylum? It's every man for himself."
Advertisement:

Private Schulz is a Mini Series that was made by The BBC in 1981.

In Nazi Germany on the eve of World War II, small-time Con Artist Gerhardt Schulz (Michael Elphick) is released from prison to do his bit for the war effort. Using his skill with languages to land what he thinks is a safe, comfortable job in Postal Censorship, Schulz is instead transferred to SS Counterintelligence. Their commander — the fanatical Major Neuheim (Ian Richardson) — is less than impressed, but immediately ropes in Schulz for a mission to abduct two British agents from Holland, where his ability to hot-wire a car gets them out of a very sticky situation.

When the nefarious British start air-dropping forged ration coupons over Germany, Major Neuheim suggests to Adolf Hitler that they retaliate with forged British five pound notes. Hitler gives his covert approval, and top forgers are rounded up from prisons and concentration camps all over Germany; including Solly, a Jewish former cellmate of Schulz.

The rest of the six-part series covers Schulz's attempts, both during and after the war, to get his hands on the expertly-forged banknotes, and stay alive in the process.