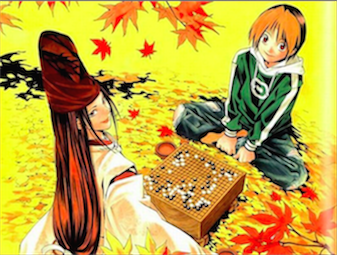 Hikaru no Go (ヒカルの碁) is a manga written by Yumi Hotta and drawn by a pre-Death Note Takeshi Obata, originally serialized in Weekly Shonen Jump from 1999 to 2003. It later received an anime adaptation that aired from 2001 to 2003 for 75 episodes.

The story follows Hikaru Shindo, an (initially) eleven-year-old Japanese schoolboy, who accidentally releases the ghost of Fujiwara no Sai, a Heian-era Go master who killed himself, and whose spirit was trapped in a bloodstained Go board. Once released, Sai's spirit posesses Hikaru, because he is desperate to play Go again, seeking to achieve the Divine Hand, the perfect decisive move. Initially, Hikaru plays for Sai, instructed by their mental link, simply to get him to shut up.

A chance game with a kid his age has unexpected consequences for Hikaru and Sai. Turns out that the kid is no piddling Go novice, but Akira Touya, son of the world's top Go master. Shocked that a beginner could beat him, Akira makes it his life mission to figure out who exactly Hikaru is. Things really begin picking up when Hikaru realizes that he might actually want to play too, and begins tapping into his own potential. Just how far can he rise in the world of Go? And can he ever catch up with his eternal rival Akira?

Emphatically does not suffer from the Sorting Algorithm of Evil, in that the identities of the two "strongest" Go players in the world are made pretty clear very early on. Whilst Hikaru meets and plays progressively better opponents as the series goes on, we know that none of them would be a match for the best players of all.

One doesn't even need to know how to play the game to enjoy the series, only an appreciation for strong characters and a compelling rise-to-the-top plot. Playing the game won't hurt, though; indeed, the game received a substantial popularity boost in Japan due to the manga. (Why don't you GO play it!?)

. Note that it had been adapted by the Chinese thus changes made according to culture.

Compare Shion no Ou, which has a similar premise, only with the game of Shōgi instead.