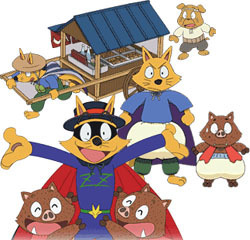 "I'm the one who will rule the world as the King of Pranks, who travels day and night, mastering his skills and tricks. Everyone calls me Zorori, the one with extraordinary talent!"
— Zorori in the first episode
Advertisement:

Kaiketsu Zorori is a series of Japanese children's books. It features a humanoid fox named Zorori and his two boar disciples Ishishi and Noshishi as they travel around the land and attempt to complete Zorori's three life-long goals:

While these are his own goals, he's also doing these things to make his late mother proud.

Zorori sees himself as a Villain Protagonist and will constantly state that he has no interest in doing the right thing, but his love of family is so great that if another's family unity is threatened he will do his best to bring that family back together, even if he winds up getting the short end of the deal. Other times when playing a prank or getting the better of someone is the focus of the episode, the prank will either backfire or the scheme will benefit the target instead of Zorori. There was also a second, very well-made 2006 movie based on the then-recent TV series.

After a 1993 movie that adapted two of Zorori's stories, a television series with a different animation style was produced in 2004 and released as Kaiketsu Zorori. Two more series were released soon after the first under the title Majime ni Fumajime Kaiketsu Zorori.